5 Social Influence Examples and How They Affect Us Daily

These social influence examples at their root are how people might behave depending on the social environment in which they are situated. An individual’s attitude may change depending on the person’s inclination to adjust to a social group or stand out. A personal belief and thought process can change, which affects a person’s adopted behavioral patterns.

When you decide based on information that someone else provided, that is informational social influence. This social influence comes from your desire to be correct. You adjust your opinions to the way people think in the hopes of proper judgment.

Normative social influence is a person’s desire to change because they want to be accepted or fit in. Peer pressure is one of the most common examples of this social influence. Individuals who are influenced by normative factors engage in vices. For example, smoking, drinking, or other misbehavior practices to gain the bullies’ approval.

When individuals change their behavior or beliefs to be accepted, impress or gain a sense of acceptance, conformity occurs. Whether a person has the same opinions or not to a group, it doesn’t matter. The only thing that truly matters to them is to gain admiration from the people they hope to impress.

If an individual changes the way they behave, that is compliance. However, compliance is not in congruence with obedience. Compliance is usually seen when a friend asks you for a favor, and you agree.

The different social influences affect how we act, whether it is evident to us or not. A person’s standing in society can determine how much they will conform with an individual. A teacher will be respected and obeyed by his students. A student will comply with their classmates’ request for a piece of their snack. A General will act differently in front of his cadets than when he is with his commander-in-chief. A person’s behavior can also be influenced, especially by those who are part of a majority. The people within the group will be pressed to follow, while those not included in the group will change to become a part of the group.

In summary, there are existing belief systems that influence the way we think and behave in society. Even our faith greatly influences how we move both within the religious group we belong to and how we act outside the group.

Are you interested in learning more about social influence and how you can use it in your business? Introducing a Profit Planner called the Power of Social Influence. Grab it here.

It’s free, and it will help you build your social proof and capitalize on it. 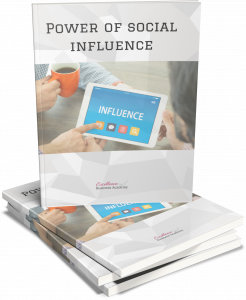 What are you waiting for?

Click here.  It comes with a full-length textbook, a workbook, idea generator, checklist, and a calendar full of tasks to implement your power of social influence.

Today, you can get it free! Grab it while you can.

Let's grow your business by leveraging our technical knowledge and proven marketing plans. Rather than providing you a bunch of technical mumbo-jumbo, let's work together to create marketing opportunities from today's technology. We work with motivated clients to develop the strategies that leverage evolving technologies. The work is exciting, fun, sometimes scary, and most always rewarding. Helping you to grow and succeed on your terms is why I'm in business. Care to take that next step forward? Call me today: 888.469.4686

This site uses Akismet to reduce spam. Learn how your comment data is processed.

Disclosure: This site may contain affiliate links to products. We may receive a commission for purchases made through these links. We only endorse products and services we use or trust.